Donut Mess with a Cop 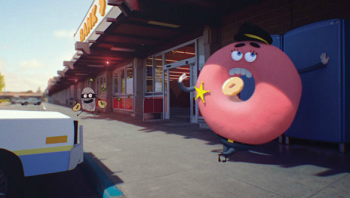 Just doin' his job... but isn't that cannibalism?
"If you want to find all the cops, they're hanging out in the donut shop."
— The Bangles, "Walk Like an Egyptian"
Advertisement:

In fiction, it's much more probable that you'll see a cop eating a donut than anyone else, except for Homer Simpson. The cop guarding your jail cell is often seen dunking their donut with pink frosting or similar in their cup of coffee. The cop in the stakeout may have a half-empty box of donuts in their car. When taking a break from driving, they commonly hang out at the donut shop.

In more humorous displays, the cop might react to a donut as Scooby-Doo would to a scooby snack. Donuts may be the defining motivation for them to have joined the force. In fact, "Officer Donut" is a casual insult for a cop. A police character might be so obsessed that they could be bribed to do anything for donuts.

In actuality, the historic association between police officers and donuts is less insulting and Makes Sense In Context for practical reasons. Cops will usually consume lots of coffee, because it's necessary for them to stay awake during the night, and the donut pairs well as a sweet to dunk in coffee or to remove its bitter aftertaste. Donuts are also ready-made, boxed for easy storage, do not melt or get inedible when old, and tend to be both filling and cheap. And since bakers want to have a fresh batch ready to sell every morning, donut shops tend to open very early, and some stay open all night. For a while, they were among the few places open for someone working the graveyard shift. Donut shops also tend to give out free donuts to law enforcement, partly as a public service and partly to encourage cops to hang around (and robbers to stay away).note This is illegal in some jurisdictions, being considered a form of bribery.

As donuts are fattening sweets, the cop munching them is commonly portrayed as a fat, lazy, moustached Obstructive Bureaucrat. Strangely, they never get glaze or frosting in their mustache.

As for Dirty Cops, just remember that Evil Tastes Good — as do donuts. And Rabid Cops might scarf them down with excessive zeal and no restraint, the same way they do their job. But if this trope brought into positive portrayals, especially as Cowboy Cops, a cop who munches donuts or other desserts voraciously can be sometimes portrayed as a Genius Sweet Tooth.

While this might be Truth in Television, it could probably be seen today as an Evolving Trope. If anything, a cop might be hesitant in buying donuts because of the inevitable stigma associated with them. On the other hand, The Red Stapler effect comes into play. On their first round, a rookie might buy some donuts for the station, believing that all cops love them. But then, everyone does, so it's fair. They might subvert this trope by eating different kinds of sweets instead, like cupcakes or brownies.

It should be noted that this is primarily an American/Canadian based trope, as donuts are nowhere near as popular with the police in many other countries. British Coppers, for example, tend to go for chips (which is to say in American, French fries) instead, and Filipino cops have a thing for pancit, the name given to several Chinese-inspired but locally-cooked noodle dishes.

Courage uses a donut to distract a cop.

Courage uses a donut to distract a cop.