Webcomic / Out at Home 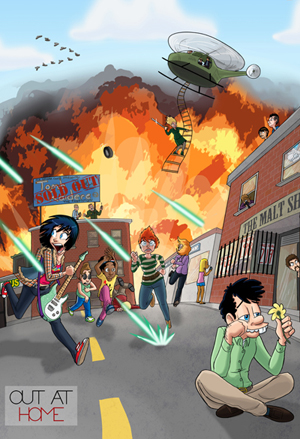 ...In a nutshell.
Advertisement:

is a webcomic by Alex Wendzel that started on November 19, 2008. It started as a family Sitcom-style strip, but morphed into a comic about HighSchool-aged Kate Beckett (Not this one) and her best friend Penny O'Brien. The comic combines slice-of-life dialogue and attitude with outlandish, outsized situations and gags. Most of the strips fall into story arcs, sometimes with added audio or video content. Each arc is separated by one-off gags. It's different, as it rarely if ever delves into the emotional and relationship drama featured in most webcomics about teenagers.

The comic is technically done, as the last strip foreshadowed some sort of reboot.

The new comic is called Living to Death

Out at Home includes examples of: