Gretzky Has the Ball 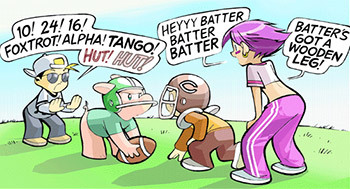 The best way to show someone's incredible lack of sports knowledge is to have them describe a sporting event by jumbling together terms and people from a bunch of different sports. Many Sitcoms use this, usually setting the man up to be humiliated by a woman, use his incorrect boasting to show that he's a Know-Nothing Know-It-All, or to make clear who the show's "manly men™" are in comparison to other men and to the women. Sometimes it is a companion of the sports fan that, when having to watch a game, attempts to understand the rules and gets it totally wrong. Regardless of the scenario, it is always Played for Laughs.

This is especially egregious when the protagonist is supposed to be a sports writer.

The trope name doesn't actually come from any particular example; it's just a great example of a person afflicted with this trope. (For those not in on it: Wayne Gretzky is basically the most famous ice hockey player to ever live, and ice hockey uses a puck, not a ball.)

This trope is for in-universe sports errors; for errors made by the writers, see Artistic License – Sports. New Rules as the Plot Demands is the version of this trope for games that only exist in the work of fiction. In a game of Calvinball, this sort of error is impossible to make, because nonsensical descriptions of the rules become the new rules. In video games, if this is the theme of an entire level, it's an Athletic Arena Level. Pac-Man Fever is this trope with video games standing in for sports. Subtrope of In-Universe Factoid Failure.