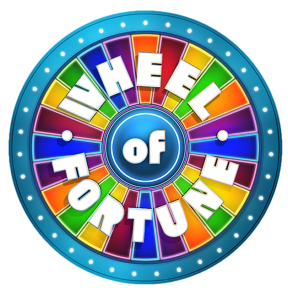 Just as Jeopardy! was ending its daytime run on NBC, Merv Griffin introduced an even more durable Game Show format: Take the children's game of Hangman, add a carnival wheel with various dollar amounts, as well as hazards such as "Lose A Turn" and "Bankrupt", and allow the winner to spend the money on prizes right there in the studio. The 1973 pilot, Shopper's Bazaar, was very different from the series; a further two pilots in 1974 hosted by Edd "Kookie" Byrnes (who admitted that he was drunk) held far closer to the rules we know today.

When Wheel debuted in 1975, Chuck Woolery was the host and Susan Stafford operated the puzzle board. By late 1983, after Woolery left the show in a salary dispute with Merv Griffin and Stafford left to do humanitarian work, Pat Sajak and Vanna White had become the show's full-time hosts in both daytime and syndication, although there was a ten-month period from 1981-82 in which Pat and Susan worked together. (Vanna became popular out of proportion to the popularity of any other woman in a similar role on a game show.) The syndicated Wheel dropped the shopping element in 1987, then switched from a mechanical puzzle board to one with touch screens a decade later. Starting in the early 1990s, it has added (and occasionally retired) all manner of new wrinkles, including new puzzle categories and a trio of Toss-Up puzzles.

After Sajak left the daytime Wheel to try his luck as a late-night talk show host on CBS, former football player Rolf Benirschke (who had very little previous TV experience) and Bob Goen tried unsuccessfully to take his place. Under Goen's watch, Wheel jumped to CBS for 18 months before returning to NBC for another nine (and eventually folding). In 1997, CBS and GSN tried a children's spin-off titled Wheel 2000, which did not fare well and remains the last daytime version. The nighttime version has carried on for an impressively long time, and is still one of the highest-rated TV series in syndication.

In 2021, ABC debuted the Celebrity Edition spinoff series Celebrity Wheel of Fortune, airing weekly in hourlong blocks of two full games (with the same three celebrity guests playing both) and still hosted by Pat and Vanna. Much like its Spiritual Predecessor Celebrity Jeopardy!, all winnings go to charities of the celebrity’s choice.

The category for this round is "Tropes" (ding ding DING ding):