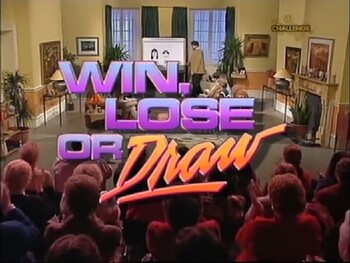 Game Show created in 1987 by Bert Convy and Burt Reynolds, alongside Kline & Friends and Buena Vista Television. In it, two teams, each comprising two celebrities and a contestant, competed in what basically amounted to televised Pictionary (never mind that there have been two different game show versions of Pictionary proper). It consisted of three rounds wherein a team member attempted to convey a given answer (usually a person, place or thing) by drawing it. At the 30-second mark a doorbell sound effect was heard, and the team member doing the drawing could opt to pass the marker to the next person in line. A correct guess earned $200 (or $100 if the marker was passed) for the team in play; if they failed to guess, the opposing team could take a guess for $100.
Advertisement:

Both contestants competed in a Bonus Round called the "Speed Round". Here, both contestants attempt to draw as many one-word answers as possible within 90 seconds, earning $100 for every correct guess from their teammates but allowing only two passed answers. Whoever had more money at the end of this round won the game and $1000 (split for a tie). Later it was dropped to a minute and $50/word.

The show aired in two different formats, both of which debuted on the same day in 1987 — a daytime version on NBC hosted by Vicki Lawrence, and a nighttime syndicated version hosted by Bert Convy. The daytime version was canned in 1989, and Robb Weller of Entertainment Tonight took over on the syndicated version for the 1989-90 season (Convy left to host 3rd Degree!, which he, Reynolds and Kline also produced, but with Warner Bros. Television instead of Disney).

The Disney Channel produced its own version, called Teen Win, Lose or Draw and hosted by Marc Price. This version began in April 1989, initially taping at Disney-MGM Studios in Florida before moving to LA, and outlasted the syndicated run, airing until 1992. Kline & Friends weren't involved with this version—instead, Jay Wolpert produced season 1, with Stone-Stanley Productions taking over thereafter. Disney Channel revived the series as Disney's Win, Lose or Draw in early 2014 with Justin Willman as host.