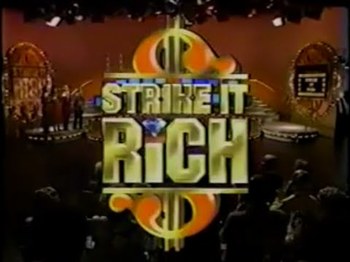 "Welcome to the fastest high stakes game on television— the all-new Strike It Rich!"
Advertisement:

Popular British Game Show on ITV, hosted by Michael Barrymore. Three eccentric couples competed to fulfill a contract of answers to a question in order to earn moves across an arch of screens. When said monitors are "struck", they would reveal either a prize or a "Hot Spot", which would cause the couple to lose their turn and the prizes they earned from the previous screens unless they chose to stop. When a team reached the next-to-last step no their path, they received a major prize (such as a vacation) and had to decide whether to risk it by trying to answer one more question and win the game.

The format originally premiered in the United States (as Strike It Rich) and was produced by Kline & Friends (of Break the Bank (1985) and Win, Lose or Draw fame), but flopped after the 1986-87 season. The British version debuted a month after the American series began, and was considerably more popular, running from 1986-94 followed by a three-year revival in 1996 as Michael Barrymore's Strike It Rich.

A one-off revival aired as part of the 2020 miniseries Alan Carr's Epic Gameshow.