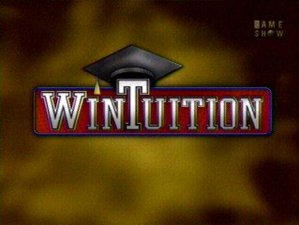 WinTuition was a short-lived Game Show produced by Henry Winkler for GSN which ran from December 5, 2002 to April 1, 2003. Marc Summers of Double Dare (1986) fame hosted.
Advertisement:

The show was a standard Q&A with a school theme. Each game was split into 12 "grades," one question per grade, with material appropriate to each. First through fourth were basic buzz-ins, while fifth gave every player a chance to score. Sixth through eighth grades were questions with multiple answers, and the lowest scorer was "expelled" at the end of this phase of the game. The two remaining contestants played the "High School" round for 9th through 12th grades, followed by the Senior Year Showdown to decide the game. The high scorer moved on to the "$50,000 Final Exam" bonus round, sitting at the "Desk of Destiny" and answering questions for a chance to win $50,000.