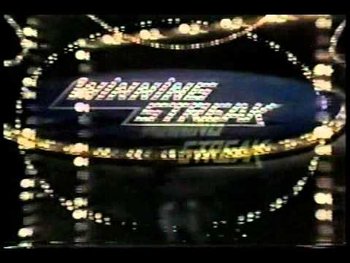 Game Show hosted by Bill Cullen and produced by Bob Stewart which ran on NBC from 1974-75. Two contestants picked letters from a 4×4 board with a category on top, and each question's answer started with the chosen letter. The first to buzz-in and answer correctly was given the letter to take (and place in one of the seven positions on the front of each podium) or pass it, with an incorrect answer awarding that letter to the opponent. The first contestant to spell a word which fit the category moved on to the Money Board.

At the Money Board, the winner picked a number from 1-6 to set the base dollar amount (from $100-$200 in $10 increments), then picked one of the remaining numbers (7-18) to reveal a letter. Giving a valid word containing the revealed letter won that base amount, after which the contestant picked another letter to try for double the base amount by giving a word with the two revealed letters. This continued (with the amount "doubling and redoubling") until the contestant either bailed out with the money accumulated or failed to give an acceptable word, thus "busting".

By December 26, things got simplified a bit — the main game goal was changed to contestants winning points behind the chosen letters to pass a certain threshold, then (apparently) facing the previous champion in a similar game to build words with the letters selected during the main game. The bonus game, now the Sudden-Death Showdown, was a cross between the Money Board and Final Showdown; the only difference was that the dollar amounts (now going up to $500) were simply added for each new word instead of doubling and redoubling.

Winning Streak replaced Three on a Match (which had the same personnel and creator) on July 1, 1974 at the behest of Lin Bolen, swapping timeslots with Jeopardy! and facing CBS' popular Gambit. The Peacock dropped both on January 3, 1975, with Streak's timeslot given to some new show by Merv Griffin.

But the original format was rather dangerous, with major problems had some particularly smart/gutsy contestants been on. While the claim was that players could win over $100,000, the theoretical top prize in each game on a network that didn't have a Game Show Winnings Cap was actually a whopping $819,200, equivalent to over four million dollars today.

Not related to the long-running Irish game show of the same name, which has been running since 21 September 1990 and is funded by the Irish National Lottery with a top prize that actually can be won.