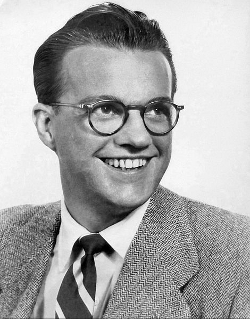 William Lawrence Francis Cullen (February 18, 1920 – July 7, 1990) was a legendary Game Show host who appeared on more games than anyone else in American television, and whose career spanned across many shows on radio and television from The '30s to The '80s (including his own 15-minute Thursday-morning variety show, The Bill Cullen Show, on CBS in 1952). He died in 1990 from lung cancer, and is often called "The King of Game Shows" or "The Dean of Emcees".

Born in Pittsburgh, Pennsylvania, Bill suffered from polio as a child and was badly injured in a 1937 motorcycle accident; as a result, he had great difficulty walking for the rest of his life. Mel Brooks has mentioned on multiple occasions (including a late-2012 episode of Jimmy Kimmel Live!) that the time he imitated Cullen's jerky walk after an appearance on Eye Guess, without knowing he was legitimately injured, was the most mortifying moment of his life. Bill graciously took it in good humor, however, and in fact told Brooks that he was actually very grateful for the mimicry as up until then, he felt that others were being too pitying of him.

On-air, Cullen's limited mobility was largely obscured by the design of his shows' sets, which tended to have him stay behind a podium with as little movement as possible, and strategic directing and editing. (Similar accommodations were made for him on shows where he appeared as a panel member.) However, this was not why he wasn't chosen to host The Price Is Right again when it was revived in 1972 — Bill, who hosted the original 1956-65 run, was in negotiations, but this fell through and Dennis James was chosen for the upcoming nighttime series (it was only by about mid-Spring 1972 that CBS expressed interest in a daytime series and Bob Barker got involved). It should be noted that James was chosen for Price about six months before most of the revival's details were ironed out.

During a 2007 countdown of the "Top Ten Hosts" by GSN, Cullen was listed as #7 despite the narration and commentators all but outright saying he deserved top prize. Still, it was better than a 2007 WNBC slideshow of the top twenty game show emcees that managed to omit Bill entirely (much to the chagrin of the station's then-chief anchorman Chuck Scarborough, who shares a birthplace with Cullen) and a 2013 WatchMojo "Top Ten Hosts" video

that relegated Bill to an uncredited clip at the very end, after the main list and honorable mentions.

Not to be mistaken for Peter Cullen (who has a very different fandom), a family of vampires, or any of these guys

who are also named "Bill Cullen".