Series / To Tell the Truth 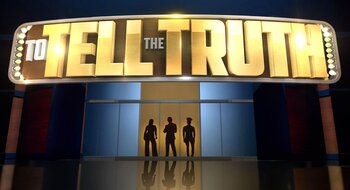 One of the many successful Goodson-Todman panel games, To Tell The Truth gives a simple premise: A person of some notoriety and two impostors try to fool a four-celebrity panel into choosing one of the impostors instead of the real person. Each celebrity has some time to question the three contestants; while the fakes can obviously lie, the real person usually has to tell the truth about him/herself. After every celebrity has had time to question the person, they guess who the real person is, and each wrong guess earned the trio cash to split amongst themselves.

This one has been revived many times. The original ran from 1956-68 on CBS with Bud Collyer as host. After CBS dropped it, it lived on in syndication from 1969-78 with Garry Moore at the helm until he retired due to throat cancer in 1977, succeeded by Joe Garagiola for the final season. Two years later, the show returned briefly to syndication with Robin Ward as the host. Then in 1990, NBC revived Truth for its morning game show block with three hosts, Gordon Elliott, Lynn Swann, and Alex Trebek, peppering its single season. A third syndicated revival took place in 2000, with John O'Hurley as its host.

A second network revival, this time for ABC, premiered in June 2016 with Anthony Anderson as host, making Truth one of only two US game showsnote along with The Price Is Right, also created by Bob Stewart to air a new episode in every decade since the 1950's. It features several new elements, including a round where the panel tries to identify the subject of a second anecdote among the two remaining impostors from the previous round, and the celebrity with the worst score facing humiliation at the end of the show.

The show, like most panel shows, was renowned for its recurring cast of celebrities. Truth's most famous panelists included Bill Cullen, Bert Convy, Tom Poston, Peggy Cass, Orson Bean, and Kitty Carlisle (the only panelist to appear on the first five versions of the show).

These Tropes Are Sworn To Tell The Truth: