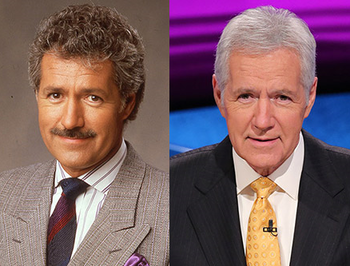 And now, here is the host of Jeopardy!... Alex Trebek!
Alex: This Canadian-born television personality was the host of America's longest-running quiz program.
Contestant: Who is Alex Trebek?
Alex: Correct. Pick again.
Advertisement:

George Alexander "Alex" Trebek OC (July 22, 1940 - November 8, 2020) was a Canadian-American television personality best known for hosting Jeopardy! as well as a plethora of shows since the 1960s. His work ranged from many types of shows: commercials, game shows, music shows, and even sport events.

Trebek's first hosting gig was Music Hop in 1963, along with a myriad of shows created for CBC. After moving his efforts to the States, he became mainly known for his roles as a Game Show Host. The longest-tenured by far has been Jeopardy!, which he hosted from 1984 to 2020. He would go on to win seven Daytime Emmy Awards during his tenure on the program. Trebek even set the Guinness World Record for the most game show episodes hosted by the same presenter on the same program in 2014 (overtaking the legendary Bob Barker). He was also a longtime spokesman for Colonial Penn Insurance.

In March 2019, Trebek announced his diagnosis of Stage IV pancreatic cancer. As he underwent treatments for the disease, he continued hosting Jeopardy until his death on November 8, 2020. After several guest hosts filled in for the remainder of the 2020-21 season, Mayim Bialik and former champion Ken Jennings were announced as his co-host successors in the summer of 2022 after alternating in multi-week stints for the majority of the 2021-2022 season after Mike Richardsnote Who was the executive producer of Jeopardy from May 2020 to August 2021 (succeeding Harry Friedman after his retirement at the end of the 2019-2020 season) and briefly succeeded Trebek as the host of the program was let go after taping a week's worth of episodes after various controversies came to light.note Due to scrutiny over misogynistic and offensive remarks he made on his 2013-2014 podcast The Randumb Show and prior wrongful termination lawsuits filed by two models during his 2009-2019 producing tenure on The Price is Right.

In September of 2021, the producers of Jeopardy! re-dedicated Stage 10 at Sony Pictures Studios, the show's long-time home, the Alex Trebek Stage in his honor.

Here are the tropes:

A Jeopardy contestant expresses the love so many felt for Alex Trebek as he battled cancer.

A Jeopardy contestant expresses the love so many felt for Alex Trebek as he battled cancer.