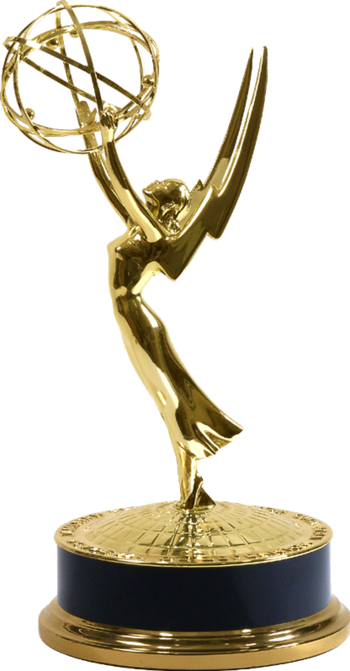 The Emmy Awards are the Oscars of Televisionnote (incidentally, the Academy Awards have been the most-awarded program in the history of the Emmys), and make up one quarter of an EGOT. Anything that has aired on TV technically qualifies for nomination — hence several feature films, and (strangely) other awards have won. Other awards for television include the BAFTAs, Golden Globes, and SAG Awards. The award was first presented on January 25, 1949. The Academy of Television Arts & Sciences (AKA the Television Academy) is the award's governing body.

The most well-known Emmy Award is the Primetime Emmy, given, of course, to, dramas, sitcoms, specials, limited series, television movies, late-night shows, and anything else that airs in primetime, or, in the case of streaming services such as Netflix, would be considered a primetime show. The Big Four Networks alternate airing the show; Fox aired the 2019 ceremony after NBC aired the 2018 ceremony. ABC aired the show in 2020, and CBS followed suit in 2021.

The second-most well-known Emmy is the Daytime Emmy, presented to daytime programming such as soap operas, which are the show's centerpiece genre. It is also presented to syndicated programming, such as game shows, talk show, and court shows. Cooking and travel shows also fall under the Daytime Emmys, as well as children's programming note Starting in 2022, children's and family programming will have their very own dedicated Emmys ceremony in response to the growing influx of such programming over the last decade, in addition to streaming services being viewed by the Television Academy as having created confusion over which shows could be categorized as airing during either primetime or daytime hours.. In order to be eligible for a Daytime Emmy, a show must air between the hours of 2 AM and 6 PM. In the case of syndicated programming, a show must be seen in at least 50% of the country. The first daytime-themed Emmys were given out at the 1972 Primetime ceremony. The first separate Daytime Emmys ceremony was held on May 21, 1974. True to the daytime theme, the awards show was aired during the day. In a more unique feature, it was held outdoors at the Channel Gardens at Rockefeller Center in New York City. The second ceremony in 1975 had an even more unique setting: in the Hudson River, with everyone aboard the SS Dayliner. In recent years, the Daytime Emmys have lost their prestige due to more and more soap operas being canceled and replaced with other programming. They no longer air on television, but instead are streamed live on the Emmys' You Tube channel. Due to the limited pool of programming, it's not unusual for people to rack up awards and nominations. Ellen DeGeneres has won the most Daytime Emmys, with 32. Susan Lucci of All My Children had a famous 18-year losing streak before finally winning a trophy in 1999.

Other Emmys include the Sports Emmys (given for sports-related programming from live events to shows such as Real Sports with Bryant Gumbel), the News & Documentary Emmys (self-explanatory), the Technology & Engineering Emmys (organized by the Television Academy's sister opreration, the National Academy of Television Arts and Sciences), and the International Emmys (given to programs that aren't produced in the United States, although there is a category for the best US primetime program that isn't in the English language).

For local television, there are the Regional Emmys. The country is divided into 20 chapters. Some chapters cover multiple states, such as the Ohio Valley chapter, which covers most of Ohio, most of Kentucky, some of Indiana, and some of West Virginia. Some chapters cover just one state, such as the New York chapter. NATAS oversees 19 of the chapters, with the Television Academy organizing the Los Angeles Emmys. Although Regional Emmys are mostly awarded to local newscasts, shows that are seen in less than 50% of the country are eligible, provided the chapter has an appropriate category. Although some chapters follow the traditional method of releasing a list of nominations, then picking a winner (although there can be ties, of course), some chapters release a shortlist of programs, and then the panel votes on whether or not any of them are worthy of receiving an Emmy, meaning they are not competing against each other. For example, if one category has a list of four programs, the panel will vote whether to give an Emmy to any of the four. In some cases, all four programs are awarded an Emmy. In some cases, none get one.

Emmy Award Winners on this wiki include: