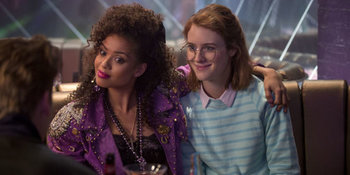 "I don't want to like anyone. So you've been just totally fucking inconvenient."
"They say in heaven, love comes first,
We'll make heaven a place on Earth."
Advertisement:

It's The '80s in the groovy American beach resort town San Junipero. Shy nerdy girl Yorkie meets quirky party girl Kelly, and both their lives are changed forever. There is much, much more to the town than meets the eye, however.