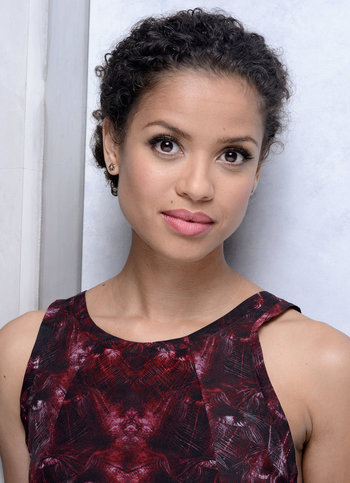 "I'd rather feel free to express myself than feel like I was doing something for the money, than feel like I'd sold out and my soul had withered in the process."
Advertisement:

Mbatha-Raw got her start in British television, appearing on the BBC's Doctor Who as Tish Jones, younger sister to Freema Agyeman's companion Martha Jones, in one of her earliest roles. She later broke into American television, starring on NBC's Undercovers and FOX's Touch (2012). In 2016, she appeared in the Black Mirror: San Junipero episode of Netflix's Black Mirror. She has since gone on to appear in several other Netflix projects, including The Dark Crystal: Age of Resistance.

Her prominence in films has seen a rise in promise during The New '10s, with Mbatha-Raw appearing in high-profile projects like 2013's biopic Belle as the title character, Beyond the Lights as popstar Noni Jean, and The Wachowskis' Jupiter Ascending as deerlike alien Famulus.

She also appears in Disney's 2017 live-action Beauty and the Beast and Ava DuVernay's A Wrinkle in Time.