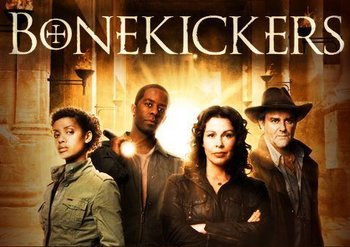 Now, for the love of Jehovah, can we please go to the pub?
— Professor Gregory "Dolly" Parton
Advertisement:

A show that could be described as Time Team meets Waking the Dead meets Indiana Jones, it involves a bunch of archaeologists who have increasingly ludicrous adventures, usually culminating in the destruction of whatever precious artifact they're after this week.