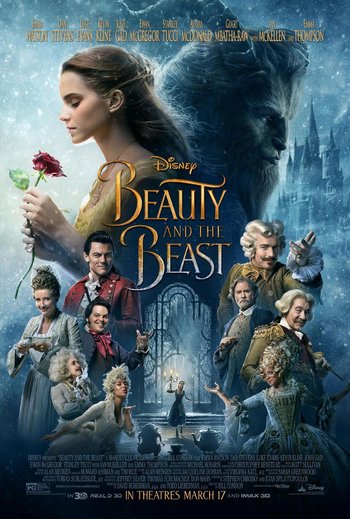 ♫ Sometimes our happiness is captured
Somehow our time and place stand still
Love lives on inside our hearts and always will... ♫
For in that solemn silence
Is heard the whisper of every sleeping thing.
Look, look at me, come wake me up
For still here I'll be.
— "A Crystal Forest", William Sharp (read by Belle)
Advertisement:

Beauty and the Beast is a 2017 Disney film based on the animated classic based on the Fairy Tale of the same name. It is the first Live-Action Adaptation of a Disney Renaissance film, and the first such Disney Animated Canon adaptation to be a musical like its source material. Its All-Star Cast includes Emma Watson as Belle, Dan Stevens as the Beast, Luke Evans as Gaston, Josh Gad as LeFou, Ewan McGregor as Lumière, Emma Thompson as Mrs. Potts, Ian McKellen as Cogsworth, Kevin Kline as Maurice, Gugu Mbatha Raw as Plumette, and Audra McDonald as Madame de Garderobe (The Wardrobe).

Belle, a spirited and intelligent young woman, loves her eccentric father but chafes at the constraints of "provincial life". When her father Maurice goes missing and is captured by the Beast in his cursed castle, Belle offers to take his place and discovers the enchanted world of the palace and the man behind the monster...

The film was released on March 17, 2017, in a similar late-winter release slot as Cinderella (2015), though with March 16 evening screenings in select markets, following recent custom for highly-anticipated films. The first teaser for the film can be seen here

and the first full trailer here

. A prequel series focused on Gaston and LeFou, titled Little Town, is in development for Disney+.