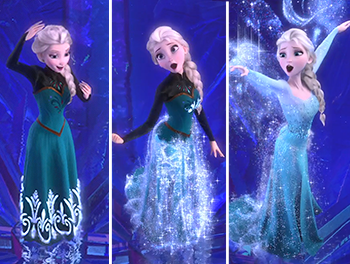 That's a very ice dress she made herself!
Candace: Oh no! Jeremy's here! How am I going to get ready in three seconds?!
(Phineas, Ferb, and Isabella suddenly get zapped by Doofenshmirtz's Ball-gown-inator ray and are instantly clothed in ballgowns.)
Ferb: ...Apparently, do what we did.
— Phineas and Ferb, "Gaming the System"
Advertisement:

This can happen many ways, from a Transformation Sequence, to waving a Magic Wand, to Applied Phlebotinum making the clothes.

See also Person of Mass Construction. Not to be confused with Gorgeous Period Dress.