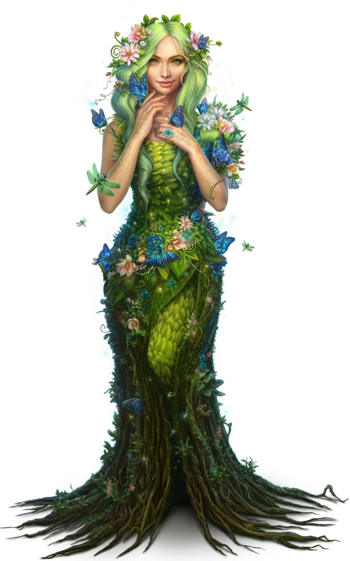 You have got to respect anyone who can combine gardening and fashion into a single discipline. Basically, they can turn still living plants into un-wilting clothes that can take on the wear and tear of everyday life without dying or breaking.

Often, this is because plant magic is involved, or obscenely advanced genetic engineering is used. A Plant Person usually straddles the line between both of these justifications. Failing that, enough money can make this a viable wardrobe option for those willing to burn through their greens. Garden Garments aren't always as glamorous and gorgeous as the page picture though. For instance, the Nature Hero may make a slipshod loincloth out of grubby leaves and vines, and monsters such as trolls may be covered in modesty moss.

A Sub-Trope of Improvised Clothes. A Sister Trope to Live Mink Coat (clothes from living animals) and Edible Theme Clothing (clothes from food; may overlap with fruits, vegetables, and/or mushrooms). See also Petal Power. Contrast with Clothing Appendage, which covers cases where a Plant Person grows "clothes" from its own body; the boundary between that trope and this one can occasionally get blurry.