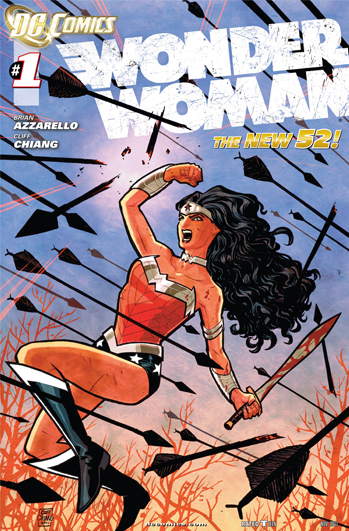 A relaunch of Wonder Woman for DC Comics New 52, initially written by Brian Azzarello with art by Cliff Chiang. Launched in the aftermath of Flashpoint, the series is a hard Continuity Reboot for Wonder Woman.

Diana finds herself caught in a war — or, rather, a tiff — between the Greek Gods when she protects a young woman named Zola from the wrath of Hera. This leads her to learn more about her true history, as she is drawn into the power struggles occurring inside and outside of Olympus.

Compared to previous runs, this series was featured iterations of the Greek pantheon that veered closer to their typical modern depictions in wider media — namely, Jerkass God for most of them. The run is noticeably darker than most takes on Wonder Woman as well.

This book was followed by Wonder Woman (Rebirth) in which Diana learns that most of what she thought she knew about herself and her people during this period was a lie and sets out to find the truth.