Throne Made of X 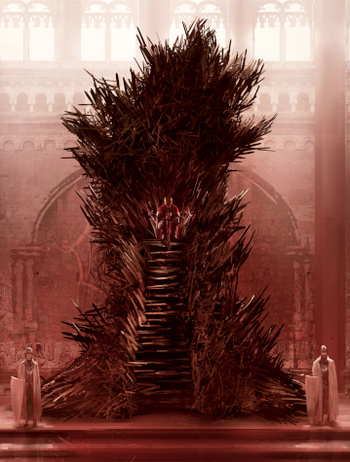 It's made of swords, and as comfortable (and safe) to sit on as it looks. Which is the entire point of the thing.
"You can build a throne with bayonets, but you can't sit on it for long."
— Boris Yeltsin
Advertisement:

A throne is ultimately a symbol of wealth and power, like anything else used by royalty.

If you want to make an extra special point about what kind of ruler you are or what your kingdom is like, one way to do it is to make your throne out of some kind of notable material that shows everyone what you're made of by showing them what you sit on.

Does your land have great and coveted natural resources? Sit on a piece of it. Do you have countless beautiful slaves? Sit on a few of them. Are you a conqueror of many kingdoms? Sit on a throne made of your enemies' weapons or worse.

See Cool Chair for non-royal versions of this trope. Though understandably there's still some overlap.