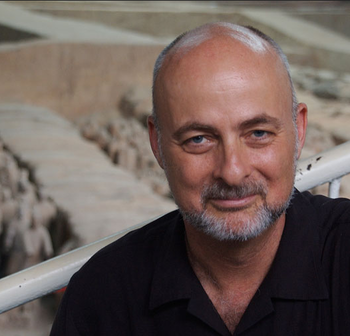 Glen David Brin (born October 6, 1950) is an American Science Fiction writer, creator of the Uplift universe. He is also the author of a highly amusing (and packed end to end with puns and references) novel called The Practice Effect, and wrote the story for Ecco the Dolphin: Defender of the Future.
Advertisement:

Around the Turn of the Millennium, Brin gained a measure of notoriety among Star Wars fans for printing a blisteringly critical series of essays regarding that universe's philosophies and messages. He and Matt Stover later compiled them into a book called Star Wars on Trial

Brin is probably the best known of the authors sometimes referred to as "the Killer B's", which also includes Greg Bear and Gregory Benford. The three are often credited with helping to revitalize hard science fiction after the rise of Cyberpunk. They became associated when each wrote one volume of a prequel trilogy to Isaac Asimov's Foundation Series.

Works by David Brin with their own trope pages include

Tropes found in his other works include