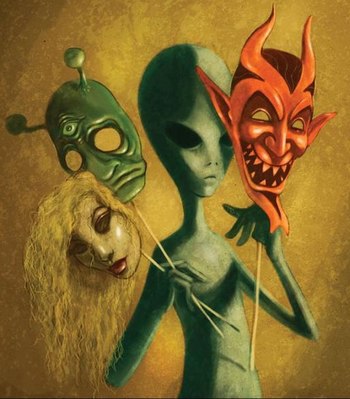 Carnivale draws tourists from all sorts of far off places. Source

Any sort of conflation between aliens and The Fair Folk.
Advertisement:

There are two variants of this trope. The first one is the so-called paleocontact theory which implies that various legendary creatures (gods, demons, angels, fairies, gnomes, etc.) are actually extraterrestrials who visited Earth many centuries ago. The other variant is the so-called "interdimensional hypothesis" proposed by ufologist John Keel and astrophysicist Jacques Vallee; according to it, the fairytale creatures (who are actually Ultraterrestrials possibly of electromagnetic origin) are nowadays posing as aliens in order to trick humans. In real life, a third view disbelieves they're real beings, but hypothesizes both are a result of our folklore (based partly on hypnogogic hallucinations), with space aliens taking the place of fairies as our ideas change.

Compare Angelic Aliens and Space Elves; also compare Digital Abomination for when supernatural creatures are conflated with AI and computer viruses rather than with aliens. Often a form of either Doing In the Wizard or Doing In the Scientist. The latter version can be seen as a subtrope of Mistaken for Aliens. See also Alien Space Bats, when aliens change real-life history itself.