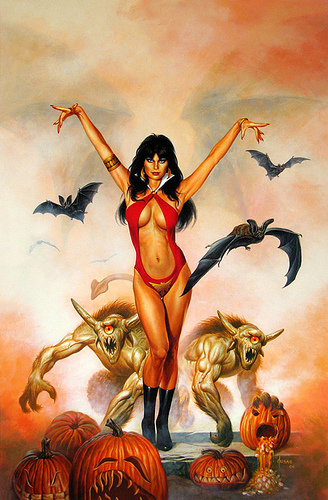 Vampirella was created in 1969 by Forrest J. Ackerman and Trina Robbins for Warren Publishing's black and white horror anthology magazine of the same name. In her first series, Vampirella was an inhabitant of the planet Drakulon, which had blood instead of water, which gave rise to a race of vampiric Human Aliens. After arriving on Earth, Vampi devoted herself to fighting evil of all kinds, as well as falling in love with one Adam Van Helsing while trying to avoid the stake of his father Conrad. 112 Issues would be published of Vampirella Magazine, which would print its last in 1983.

The series was revived in The '90s by Harris Publications. This resulted in Vampirella's origin being changed to becoming the daughter of Lilith who had been brainwashed into believing she was an alien from Drakulon. Harris Publications would publish 46 issues of Vampirella across two volumes with the last years marked by a large number of crossovers.

Later, her license was acquired by Dynamite Comics, who put out a Darker and Edgier version for 2010. This series lasted 38 issues, only for the character to be given a reboot by author Nancy A. Collins. Dynamite's second volume (Vampirella's fourth) continued Vampirella's original continuity before a Crisis on Infinite Earths-style event resulted in her being banished to a new reality where she had a Lighter and Softer existence. Dynamite's third volume (Vampirella's fifth), written by Kate Leth, began in 2016, debuted her under a new more conservative costume. A fourth volume, (Vampirella's sixth) launched in 2017 and has ditched said conservative costume for a slightly different one. This new series takes place in a thousand years into the future which Vampirella awakes into a world much different from the one she left. It's quite the Mind Screw.

There was also a Roger Corman-produced Live-Action Adaptation in 1996, starring former Bond Girl Talisa Soto in the lead role. An earlier attempt at a movie series by Hammer Horror in the 1970s remained stuck in Development Hell until the company folded.

A summary of the character's history can be found here