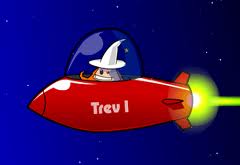 He's driving a flying sorcerer.
GUIDE THE SPACEMAN THROUGH THE CASTLE AND DEFEAT THE WIZARD.
— Star Guard
Advertisement:

Sometimes Science Fiction isn't really science fiction. Sometimes, it's actually fantasy. Even so, some things are usually seen as a part of one genre and not the other. If you see a magic sword, for example, you can assume it's fantasy and not sci-fi. Space travel, on the other hand, is firmly in the realm of science fiction, and not fantasy.

Except when the High Fantasy takes place in outer space without the use of sufficiently advanced technology or being "super-evolved" or some such, that is.

Sometimes this is a science fiction setting with some distinctly fantasy elements, such as Magic by Any Other Name. Other times, the only science fiction element is the fact that it's taking place on an alien planet. Magitek can sometimes be commonplace in such settings, but not always.

A subtrope of Science Fantasy. Compare and contrast to Fantasy Aliens which plays a traditional scifi trope in a primarily fantasy setting.