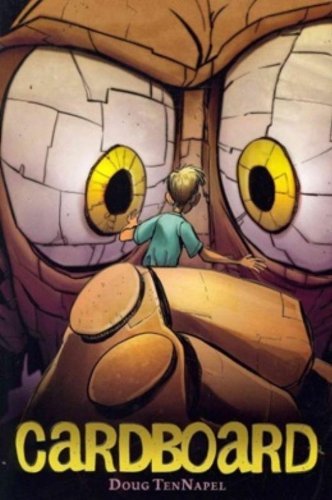 Cardboard is a graphic novel from Doug TenNapel (creator of Earthworm Jim and The Neverhood) and published as a part of Scholastic's Graphix imprint.
Advertisement:

The story starts with Mike, a carpenter who's been out of work for a while. He wants to give his son, Cam, a cool birthday present, but all he can afford is a 78-cent cardboard box from a mysterious old man with a lazy eye named Gideon. Mike and Cam make the most of the lame birthday present by cutting and pasting the box into the shape of a cardboard boxer – who magically comes to life. The worst present in the history of birthdays quickly becomes the coolest birthday present in the history of the universe.

When their nuisance of a neighbor Marcus finds out about the cardboard boxer, he steals some of the magic cardboard to make his own monsters. It's a foregone conclusion that his creations turn on him. With cardboard creatures rampaging all over the neighborhood, Mike, Cam, and Bill the cardboard boxer must step in to save the day.