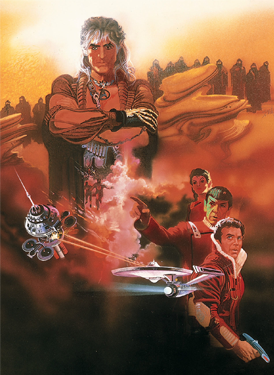 At the end of the universe, lies the beginning of vengeance.* And yes, that's really his chest.
Kirk: Khan, you bloodsucker. You're gonna have to do your own dirty work, do you hear me? Do you? (...) Still, old friend. You've managed to kill just about everyone else, but, like a poor marksman, you keep missing the target! (...) Khan, you've got Genesis, but you don't have me. You were going to kill me, Khan! You're going to have to come down here. You're going to have to come. down. here.
Khan: I've done far worse than kill you. I've hurt you. And I wish to go on... hurting you. I shall leave you as you left me, as you left her... marooned for all eternity, in the center of a dead planet. Buried alive...! Buried alive...!
Kirk: [Trembling with rage] ...KHAAAAAAAAAN!!!
Advertisement:

The one where Kirk screams Khan's name.

Star Trek II: The Wrath of Khan is the second movie in the Star Trek film series, released in 1982.

The plot features the charismatic genetically-engineered tyrant Khan Noonien Singh of the original Star Trek episode "Space Seed", fifteen years after the events of the episode (matching the real-life gap between that episode and this film). Khan escapes his exile with revenge against the man who sent him into exile, Starfleet Captain James Tiberius Kirk as his main goal, and establishing a galactic Empire as his secondary goal, using a stolen compact terraforming device as a weapon to seal his victory. Meanwhile, Admiral Kirk has been promoted beyond his usefulness and is facing a mid-life crisis (apparently having forgotten everything from the first film). It doesn't get any easier for him when a young woman he once knew turns up with his son.

Outside the world of Star Trek, Wrath of Khan is notable for containing two big breaks:

No real relation to the aborted Star Trek Phase II TV series, whose pilot became Star Trek: The Motion Picture. Also not to be confused with Star Trek Into Darkness, a (loose) remake of this film set in the Alternate Timeline created by J. J. Abrams for his cinematic franchise.

Tropes seen in The Wrath of Khan include:

USS Enterprise departs spacedock on what is at first a normal training cruise.

USS Enterprise departs spacedock on what is at first a normal training cruise.