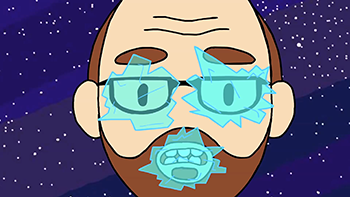 "Ah, Kirk, my old friend, do you know the old Klingon proverb that tells us revenge is a dish that is best served cold? It is very cold... in space."
— Khan Noonien Singh, Star Trek II: The Wrath of Khan
Advertisement:

An inversion of Convection Schmonvection, Space Is Cold is the widely held misconception that space is in itself "cold." We hear Speculative Fiction writers talk about "the cold depths of space" or "the freezing void." If you get thrown into space without a spacesuit, you're going to freeze straight away, assuming you don't explode.

While you would freeze in space eventually, you will not freeze instantly. In brief, there are two reasons why. Before exploring them, it's worth noting that "freezing" specifically means "heat leaves you". There are two ways heat can leave you: convection/conduction and radiation.

So why isn't space cold (in the way we understand it)?

The first reason is that temperature and heat are physical properties of matter. Space is the exact opposite of matter. Space is the absence of all matter — or close enough that the difference is academic. Asking "what is the temperature of space?" is like asking a bald person what their hair color is. This means you cannot touch space because there is nothing to touch in the first place. This in turn means heat loss by convection or conduction cannot happen in space. Like matter, energy can't be created or destroyed. Things cool off when heat goes from them into the surrounding matter, even the air; nothing for the heat to travel into means the heat doesn't leave you. (Touching the surface of your spacecraft, however, can be a whole different story). This is how a thermos works, by the way; there is a near-vacuum surrounding the storage space, preventing heat from passing through.

The second reason is that radiating heat is a slow process, especially if you are in a space suit. Space suits are made to be cold (or hot for that matter) on the surface, meaning that as soon as the surface of a space suit turns cold, it radiates a lot less energy. And more important, depending on where you are in space, you can have incoming radiation that balances out — or overcomes — your heat loss.

In other words, if you are too close to the Sun (or any other star) you will not freeze when exposed to space; you will either be kind of cozy, or you might burn.

Where is the comfort zone? Suppose you put on your swimming trunks, don a fishbowl style helmet, and go outside your spacecraft for some tanning... what would happen?

As for spaceships becoming incredibly cold when left without power, the real trouble with spaceships is getting rid of all the heat they produce, so that the engines don't cook the crew to death. Indeed, spaceships are designed to radiate heat as much as possible, and have heaters that kick on when their electronics aren't running or they pass into the shadow of a world. That's why everything was cold in Apollo 13—all the 60's era electronics that doubled as space heaters were turned off to save power. Generating heat is much easier than generating cold, which is why spaceships are designed to be slightly in the negative in their heat generation without the heaters running to compensate.

Nonetheless, "cold space" is a near-universal trope in Speculative Fiction, to the point that aversions are met with disbelief.

This all aside...you still WILL freeze in (deep) space. It will just take much longer than you'd think.