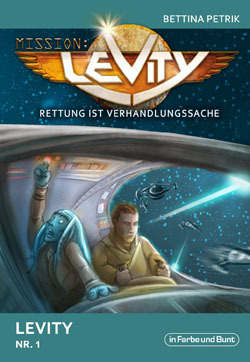 Mission: Levity is a monthly German Science Fiction serial published since 2015 in e-book, audiobook and printed format. It leans strongly towards the Space Opera side of the Mohs Scale of Science Fiction Hardness.

Captain Cheb Fantas had it all: a brilliant career in the United Security Enforcement, a loving girlfriend, a steady supply of crackers... and an inability to think before talking. Jobless and washed up, he gets hired by the mysterious Irsil, who offers him a job as captain to a crew she is assembling.He refuses, but is soon forced to rethink when he realizes that somebody is trying to assassinate him. Barely escaping with his life, he finds out that he has been branded as a traitor and terrorist by the USE. Now a fugitive both from his old employers and whoever is trying to kill him, he has to deal with a crew of renegades, a ship that has seen better days, and a mission that will change his view of the world as he was taught it.