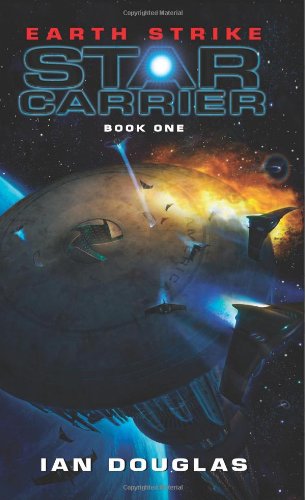 The Star Carrier series is a series of Military Science Fiction novels by Ian Douglas, who also wrote the nine books of the Galactic Marines series (as well as a variety of Expanded Universe titles under his own name of William H. Keith, Jr.).

In the 24th century, humanity is a spacefaring power, the Terran Confederation of States, that had been trading profitably for about fifty years with a species called the Agletsch Collective. This came to an abrupt end when the masters of the Agletsch, a vast empire calling themselves the Sh'daar, demanded that humanity take its place as a vassal state or cease all trade with the Collective. There was some disagreement on that point, and when the series picks up in 2404 with Earth Strike humanity has spent the last four decades slowly losing ground to a second, very warlike, Sh'daar vassal race called the Turusch.

The series focuses on the efforts of Admiral Alexander Koenig, commanding officer of a Confederation Navy battle group led by the kilometer-long star carrier America, to turn back the Sh'daar and save humanity. It currently consists of:

While operating on a fair bit of sci-fi realism, spacetime manipulation is about the only really out-there technology and it informs much of the rest.

Not to be confused with Star Citizen.