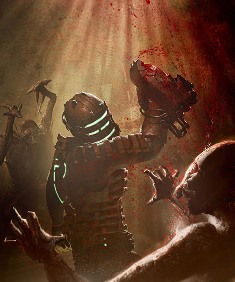 Isaac Clarke is not having a good day.
Advertisement:

The series takes place in the future, where humanity has become technologically advanced and colonized space. However, all this progress comes with a cost: Earth is an ecological ruin, and humanity has turned into a race of Planet Looters, smashing apart entire planets for their raw materials, and conducting as much research as possible into new sources of renewable energy.

The good news is: they found such a source in the Marker, a giant double-helix alien monolith discovered in the ashes of the asteroid that killed the dinosaurs. It produces a seemingly-endless electromagnetic field that scientists hope to harness. The bad news is: it's an Artifact of Attraction and an Artifact of Death that causes everyone nearby to go violently insane, and reanimates its surrounding corpses into horrifically mutated Necromorphs, which seek out and kill everyone nearby in gruesome ways.

The players play as Isaac Clarke, a humble engineer who becomes entangled in the deadly world of Markers and Necromorphs when his maintenance team attempted to relieve the distress signal of USG Ishimura, only to discover that it has been infested with Necromorphs and that they're now knee-deep in government conspiracies on the Marker.

Every story in the franchise involves a Necromorph outbreak in a closed environment, and the characters who try to survive it. Either the survivors are there during the outbreak or show up after the place has gone to Hell.

Other important points of the series include the Church of Unitology, a major human religion that worships the Marker as the path to human "Convergence"; the re-purposing of power tools as weapons; the necessity of shooting An Arm and a Leg off the Necromorphs in order to kill them; each type of Necromorph having a unique "killing Isaac" animation; and a Diegetic Interface in which people wear Life Meters on their backs.

Works in the Series

Plans for Dead Space 4 were placed in Development Hell after 3 didn't sell as well as Electronic Arts had hoped. Visceral Games was then tagged to develop a brand new Star Wars single-player video game. In October 2017, EA shut down Visceral Games, which left the future of the Dead Space franchise in serious doubt. Those doubts continued until July 2021 when EA announced a remake of the first Dead Space for PC, PlayStation 5 and Xbox Series X|S developed by Motive Studios, which will utilize the Frostbite engine.

During the 2020 Game Awards, however, a Spiritual Successor developed by Striking Distance Studios, which has the original creator of the series Glen Schofield at its helm was teased,

called The Callisto Protocol. It is set to release for Microsoft Windows, PlayStation 4, PlayStation 5 and Xbox Series X|S in 2022.

Additionally, Isaac appears as a playable DLC character in PlayStation All-Stars Battle Royale, and is based primarily on his Dead Space 3 incarnation.

When Isaac puts on his Engineering Suit in Dead Space 2 (or any other suit for that matter), the helmet is built around his face. You can even see the small metallic arm placing the front side of his helmet from his chest-plate in this example.

When Isaac puts on his Engineering Suit in Dead Space 2 (or any other suit for that matter), the helmet is built around his face. You can even see the small metallic arm placing the front side of his helmet from his chest-plate in this example.