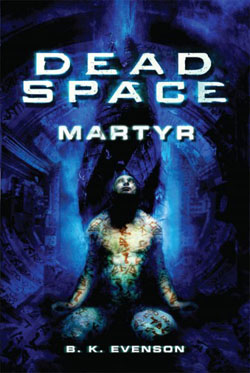 Dead Space: Martyr is a Tie-In Novel set in the Dead Space universe, written by B.K. Evenson. It is a Prequel taking place long before the rest of the series, and reveals the history of Michael Altman, the head figure of the Church of Unitology, and his discovery of the Black Marker, the first evidence of alien life.

The story is divided into three sections. The first section is about Altman and several other scientists discovering the Marker in the Gulf of Mexico, and their attempts to retrieve it as people start to hallucinate and lose their minds. In the second part the military comes in, kidnaps the scientists, including Altman, and threatens to kill them if they do not experiment on the Marker. In the final part, Necromorphs appear and invade the secret lab everyone is in, and Altman has to escape while dealing with the Necromorphs and the military.