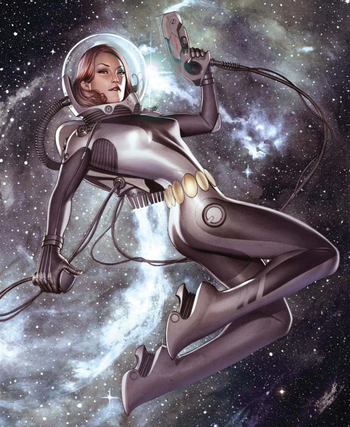 "That's what turns a Mediocre Voyage into a Fantastic Voyage!"
— Homer Simpson, The Simpsons
Advertisement:

Any space suit or environment suit, but especially one worn by a woman, will be exceptionally tight, form-fitting, and flatteringly cut. Also applies to pilots' g-suits (which admittedly are tight, but not flattering), Powered Armor, and futuristic military uniforms. The wearer will have no difficulty putting it on quickly. Helmets will often be either clear bubbles or be motorcycle-like helmets that follow head movement, with large transparent and nonreflective faceplates.

Spacesuits in use today are bulky and inflexible, with many layers to contain pressure, protect against puncture from fast-moving space junk with ballistic fibers, protect against changes in temperature, shield the wearer from the glare of a sun undimmed by atmosphere, and dispose of excess body heat, excretions and moisture. Astronauts accessorize with the extremely unsexy (for most), yet practical, adult diaper.

Because existing spacesuit designs have so many drawbacks, and are so expensive (each custom-fitted suit costs over a million dollars and can only be constructed by subsidised industries), there are a number of (similarly subsidised) research projects trying to make skin-tight spacesuits Truth in Television. The proponents of the mechanical counterpressure (MCP) suit

claim that they could be built by wet-suit manufacturers at a cost of only a few hundred dollars. They also suggest that these flexible skintight suits would permit the occupant to regulate body temperature simply by sweating, and that while they might not be terribly protective, armor is less of an issue when it doesn't have to be pressurized — Bullet Proof Vests can be worn over the suits.note That does introduce a new problem, namely that anything worn over the suit will make it harder to find and patch any leaks. On the other hand, a small leak in such a suit will generally cause a frostbitten hickey, rather than rapid death. So far, however, practical spacesuits based on MCP suit technology have yet to be tested in space,note although the original Space Activity Suit was successfully tested in a vacuum chamber, so currently they remain Vapor Wear— erm, sorry, Vaporware.

The Latex Spacesuit is essentially a way to be semi-Stripperific and display the chest without actually showing skin. A lot of the time it will be sheer enough to see the navel through.

It is a very frequent trope in Humongous Mecha shows.