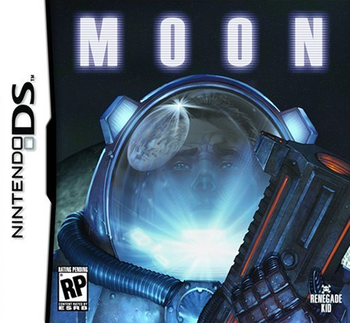 The DS cover for Moon, back before it was turned into Moon Chronicles.
In 2009 developer Renegade Kid published the Nintendo DS game Moon. Several years later the game was re-released as Moon Chronicles for the Nintendo 3DS, with plans to make it an Episodic Game, with the content from the original game making up the first "Season" and all-new content making up the second "Season." However this never panned out.
Advertisement:

The year is 2058 and a strange hatch leading to a massive underground alien complex has been discovered on the moon. Major Edward Kane and a small team from the ETEO (Extra-Terrestrial Encounter Organization) are sent into the alien complex to uncover its dark secrets.