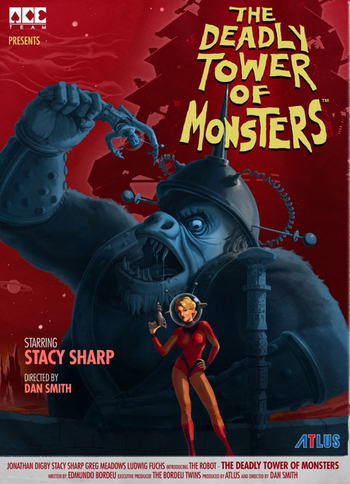 The Deadly Tower of Monsters was a Space Opera B-Movie from the early 1970s. Now, (2016) the movie is being released on DVD (PC, PS4) and you take on the role of the movie's three heroes, fighting your way through all manner of monsters, all while the film's director, Dan Smith, gives colour-commentary and behind the scenes trivia about the movie.
Advertisement:

In the movie (game) proper you play as Dick Starspeed, (played by actor Johnathan Digby), Scarlet Nova (played by actress Stacy Sharp), and "the Robot," as the group seeks to liberate planet Gravoria by climbing the titular Deadly Tower of Monsters.