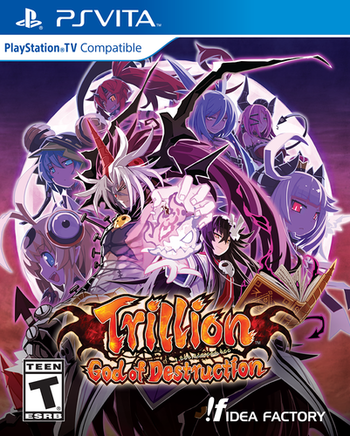 Trillion: God of Destruction is a 2016 game made by Compile Heart for PlayStation Vita as part of the Makai Ichiban Kan ("Number 1 House in Hell") series, a project that consists of multiple non-connected games which are developed as part of Compile Heart's branding for titles created by a newly established development team.A PC port was released

Zeabolos, a great overlord and the former overlord of wrath, was having a normal life in the underworld when he discovers Trillion, a powerful monster with a trillion HP. An attempt to battle Trillion leads to his death. However, he comes back to life by making a pact with Faust, a mysterious woman who wields a grimoire: in exchange for Zeabolos' soul, Faust will revive him. Back on his feet, Zeabolos travels to find a way to defeat Trillion, aided by six Overlords (who are all cute girls), in order to stop the destruction of the underworld.

The game is a mixture of Sim RPG and Rogue Like in which you have to train your overlord to be strong enough to defeat Trillion. During training, you can raise their stats, improve their weapons and techniques or take a break.