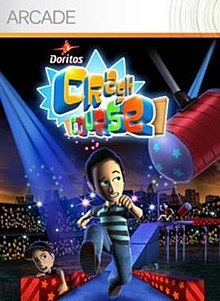 Doritos Crash Course is a Platforming advergame, released for Xbox Live Arcade on the Xbox 360. The first game was released on December 8, 2010, as a finalist of a competition sponsored by none other than Doritos. The unexpected sequel was released on May 8, 2013.

If you've watched Takeshi's Castle or Wipeout, you'll find the premise familiar here—your goal is to race through a gauntlet filled with various obstacles, like conveyor belts and giant hammers, as quickly as possible. Finishing earns you medals based on your time and can be a determiner in what levels are subsequently unlocked, traveling the world in locations such as Japan and the Amazon. There's not much more to them, but both games are free, so why not check them out yourself?