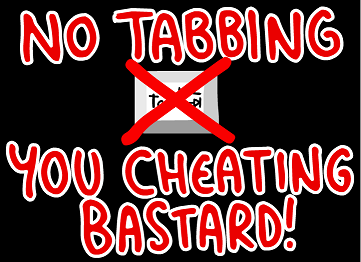 In Soviet Russia, A Cheating Bastard Is You!
"Don't even think about using auto-fire, or I'll know."
— Revolver Ocelot, Metal Gear Solid

Many video games have measures built in to punish the player for cheating (whether by built-in cheat codes or external cheating/hacking devices).

These countermeasures can vary from simple messages and reminders that constantly remind (and hopefully embarrass) the player about not playing by the game's intended rules, to more serious measures like denying access to certain features (bonus content, achievements, etc.) while cheats are in effect. In extreme cases, the game can permanently 'brand' the player's save file with some kind of designation to indicate the use of cheat codes (some games can erase their save file outright).

Of course, the game's own AI is never penalized for cheating, because everybody knows The Computer Is a Cheating Bastard.

Subtrope of Earn Your Fun. Compare Easy-Mode Mockery, where the game just doesn't like you making it easier for yourself. Also related to some examples of Copy Protection, where the game punishes the player for pirating. May be a result of fine Developers' Foresight.