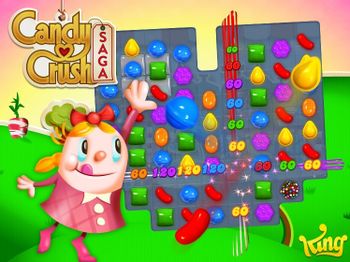 Swipe. Match. Relax.
— Tagline, from splash screen Unfortunately, this is something you probably won't do while playing this game.
Advertisement:

Candy Crush Saga is a free-to-play Match-Three Game by Maltese developer King.com. It is available for Facebook (link

), Android and iOS, and Windows 10, with a storyline and level progression. There's also a best-score-in-three-minutes

version available at their website. As suggested by its name, the items you try to match three of are candies. Your main character is Tiffi, who goes around trying to help characters out, such as trying to get a candy machine working and waking up a yeti. There's also another character named Mr. Toffee who gives you tips along the way.

As in most Match Three Games, you get special candies for matching more than three candies at once:

Other special items include Lollipop Hammers (used to crush candies or obstacles on single spaces), Jelly Fish (which multiply and eat jelly on Jelly levels; however, they will not reach jellies hidden under popcorn), Lucky Candies (used to create combos needed to complete Orders levels), and Coconut Wheels (which, on Ingredients levels, turn three candies in a row into striped candies that go off automatically). Note that many boosters can only be used on certain types of levels - for example, the Coconut Wheel is available only for Ingredients levels (although it will sometimes appear from a mystery egg in other types of levels).

There are currently six types of levels that are in Candy Crush. All of the levels have a distinct kind of background music, although the Score and Order levels share the same background music (which is also used in the free version). They were also Color-Coded for Your Convenience prior to 2022.

Besides Jelly and Ingredients, there are other things cluttering up your board:

It's fairly complicated, but addicting in the way Match Three Games can be. Accusations have flown around about its Allegedly-Free nature, particularly concerning Difficulty Spikes that encourage Bribing Your Way to Victory. Whether this is true or King have simply managed to adjust the difficulty curve correctly, the net result is that Candy Crush Saga is the highest-grossing game on both Apple's App Store and Google Play. (For contrast, the most lucrative pay-to-purchase app, Minecraft Pocket Edition, is in ninth place on that same list.)

It is now followed by its sequels, Candy Crush Soda Saga (starring Kimmy, Tiffi's sister), Candy Crush Jelly Saga and Candy Crush Friends Saga. Part of the charm of the first three games is that, as well as the candy theme, they also have a cardboard-cut-out doll aesthetic, with characters' limbs and other moving parts held on by very visible treasury tags, while the fourth uses 3D designs for its backgrounds and characters.

Other similar games by King include Farm Heroes Saga (with "cropsies") and Pepper Panic Saga (with exploding peppers).

The game made headlines again in 2015, when its creator, King.com, was bought out by Activision for 6 billion dollars. Among other things, the event also gave added relevance to '''Candy Number Crunch Saga

, an IPO stock-trading simulation for titular company, available for free and made entirely in Microsoft Excel.

In the summer of 2017, CBS debuted a Game Show version of Candy Crush utilizing two giant arrays of touchscreen monitors to make for an enormous playing environment, hosted by Mario Lopez. It was an elimination-style competition between four teams of two decided through four rounds of various gimmick-filled, game-themed challenges, with the last round being a face-off between the last two teams to see who could be the first to fifty matches to win $100,000.

Unfortunately, the ambitiousness of the game show production went a little too far when it soon became clear that the giant displays were so big nobody could even view enough of the environment at any given time to competently play the game, even self-proclaimed experts, causing most episodes to descend into bumbling and uninteresting matches. This, along with criticisms about how the show's hour-long run time and the lack of effort to fix these major flaws only exacerbated the problem, and quickly led to the swift cancellation of the game show after only one season, being written off as a mostly overblown Ratings Stunt and another cash-in for the franchise name.