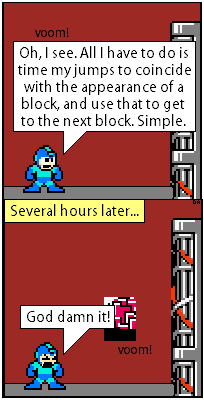 A gameplay mechanic in an otherwise fun/enjoyable game that generates a sizable hatedom. Perhaps it's out of character for the game, or the quality of its execution is lower than the rest of the game, or it really exposes the problems in the game.

Gameplay tactics do not count unless it's the exploitation of glitches and hacks. Otherwise, that's just abuse of an otherwise fair and good mechanic that causes the game to be played in a way that it's not supposed to. That One Boss is only related to this if a boss villain's status under that trope is solely because of a gameplay mechanic.

So why do these mechanics make it into games? Maybe the idea was fine, but executed poorly. Maybe Executive Meddling forced the developers to shoehorn in a mechanic the game didn't really benefit from. And sometimes the mechanic does have upsides that make the developers choose to put it in and keep it around.

Compare to Disappointing Last Level, Gameplay Roulette, and Unexpected Gameplay Change. Despite appearances, this is not to be confused with a machinery technician who picks a lot of fights, nor is it about Slippy Toad, who is merely a Scrappy who happens to be a mechanic. Also nothing to do with a similarly named video game. Can also cross with Oddball in the Series where that one game that differentiates itself from the others in the series may stand out due to the Scrappy Mechanics it uses.

For a sometimes overlapping Sister Trope, see That One Rule. Contrast Anti-Frustration Features, which are intentionally included to avoid this kind of feeling, and Underused Game Mechanic, for good game mechanics that don't get used as much as players hope.

Please keep in mind that this is based on opinions. What one player may consider something to be a Scrappy Mechanic, another may see it as an acceptable gameplay element, and vice versa. Don't take it personally if you see a mechanic you like here.