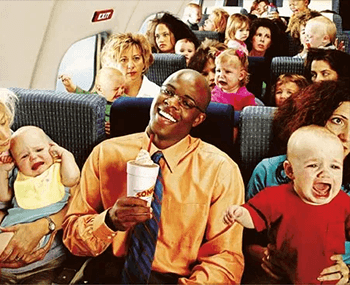 The characters board an airplane or other public transport. Almost inevitably, a baby will start crying.

Babies are new to this world and have no language skills to articulate their discomfort or understand instructions on how to relieve it. So when they're faced with air pressure changes, unusual loud noises, the presence of strangers, and the other hazards of public transportation, they're left with the default of screaming their lungs out. Plus, the child may be ill and in pain, and there's always hunger and dirty diapers to cause further discomfort.

This Real Life situation is often used in fiction when the characters are forced to take public transportation. It may just be an offscreen wail, or the parent of the child may be shown desperately trying (and failing) to hush the infant, or callously ignoring the kid and the pained reactions of those around them.

It can also be used as a characterization moment, with the character being a Jerkass to the harried parent, or demonstrating an ability to soothe the child.

A similar effect happens in theaters, auditoriums, churches, and other crowded buildings, but in these cases, it's usually possible to remove the baby and alleviate the problem. (In fact, these places often have specifically designated "crying rooms" for this precise purpose.)

This is very common on a Plane Awful Flight.