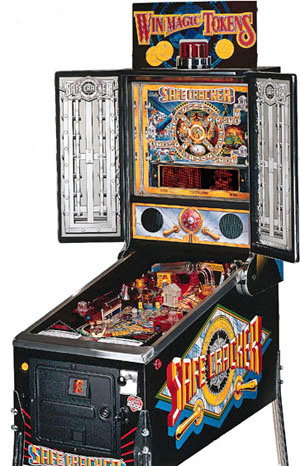 The Age of Change
CANDY 2000: "You are trespassing! You have been warned."
Advertisement:

Safe Cracker is a 1996 pinball machine by Pat Lawlor and Williams Electronics (under the Bally label), with art by John Youssi. The game revolves around a bank heist, where you must avoid guards and sneak into the vault to crack the safe and get rich.

It is very different from most pinball machines — the playfield is noticeably smaller, allowing it to fit in places a conventional pinball machine couldn't go, and the backglass is rather large. Players do not have a finite amount of balls, but instead have a set time limit to get into the Vault, whereupon a board game begins on the backglass. The player (and the computer, playing the security guards) rolls the dice in hopes of getting a good space. Making it to the safe in the center ends the game, and the player is rewarded with a Magic Token that rolls out of the backglass.

Players could keep playing to collect the twenty different token designs available. Alternately, players could use the tokens to play "Assault on the Vault", where they have 90 seconds and four balls to hit as many targets and shots as possible in order to break into the vault once again. A third use — intended in the design but never actually promoted — was for adult-oriented venues to let players redeem tokens for free drinks or other rewards.

The game was promoted as the first in the new "Token-Pin" series; unfortunately, it failed to catch on and the idea was never expanded upon. Fewer than 1,200 tables were made, and the ones that are still in good condition today are highly sought after by collectors.

Pat Lawlor's later Monopoly pinball would make use out of the board game idea.

No relation to the two video games.

"Tropes: The stuff dreams are made of!":