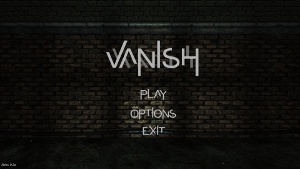 This is the lightest the game will ever be.
Advertisement:

Vanish is an indie horror game developed by 3DrunkMen on the Unity engine and hosted on IndieDB.

You are a Featureless Protagonist, who is set into a darkened sewer to do... something. There is a tunnel that leads out. It's the only way you can go. It's just scary. The tunnels aren't very well lit, the pipes are rattling, and there's this suspicious clicking in the distance...

The fact that the player is told nothing about what is going on or what they are doing is an intentional design choice on the developer's part. The only way to proceed is to pick your favorite tunnel and start walking. The story, what little of it there is, is explored through markings and messages spread throughout the tunnels.

The game is downloadable here

. You can also get in touch with the developers via the comments section. To date, only approximately thirty people have beaten it.