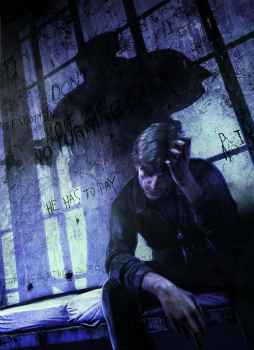 Enter the town's latest prisoner...
"I never hurt anybody who didn't deserve it. And I sure as hell never hurt any kids. I wouldn't be able to live with myself."
Advertisement:

Silent Hill: Downpour, the eighth game in Konami's Silent Hill franchise, follows the story of prison inmate Murphy Pendleton and his visit to the best vacation town that Satan ever built.

During a routine transfer to a new prison, the bus transporting Murphy crashes, which leaves him a free man. With a security officer from the transport on his trail, a desperate Murphy tries to escape from both his fate on Death Row and the ever-worsening weather by following a worn-down road through the nearby woods. That road eventually leads Murphy to the world's least desirable vacation destination: the resort town of Silent Hill. His luck changes for the worse after he enters the town, as supernatural monsters assault him at every turn—including two symbolic übermonsters in The Bogeyman and The Wheelman—while an unnatural force threatens to rip his body and soul apart in the Otherworld. He also discovers that he has a deeper connection to the security officer trailing him than he knows, and it could be the key to helping both of them survive Silent Hill.

Like other games in this franchise, notably Silent Hill 2, the titular town of torture takes on a unique personality that preys upon the inner turmoil of the protagonist. This time around, the haunted hellscape is washed out in torrential rain, representing the prison showers where Murphy encountered and killed a child molester, and electricity arcs across the landscape whenever Murphy travels into the Otherworld, along with guillotine symbolism in sliding doors, playing into his fears of execution for his crimes. Many of his enemies serve as obstacles more than free-roaming creatures to defeat, being imprisoned in their own torment even as they block his way forward.

Murphy also sees a lot of fire during his trips to the Otherworld; given the circumstances, Hell might be a better place to live.