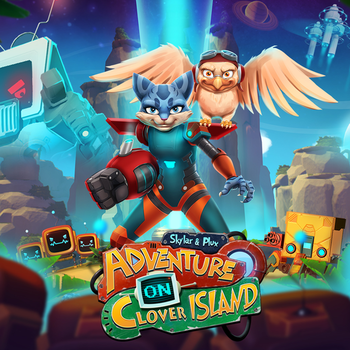 Skylar and Plux: Adventure on Clover Island is a 3D Action Platformer from Right Nice Games and Grip Digital. Released for Steam, Xbox One and PS4 on May 19, 2017.The game is an homage towards previous 3D platforming games during the early 2000.

You play as Skylar Lynx, an amnesiac anthropomorphic feline with a right robotic arm along with her companion owl Plux are on a quest to restore the fuse stolen by the devious CRT. The game lets you collect countless gems scattered around the world, which are used to free the caged Lo’as kidnapped by CRT’s minion. Skylar obtains several helpful gadgets that can aid her in traversal and combat