Get into Jail Free 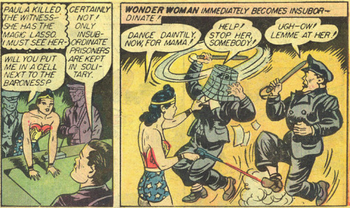 When asking nicely doesn't work...
Harkness: I heard a rumour you were in here, so I committed a few crimes. Well, maybe a lot of crimes. Maybe more than I should have...
The Doctor: What sort of crimes?
Harkness: You're going to take the moral high ground with me when I'm breaking you out of prison?
— Doctor Who, "Revolution of the Daleks"
Advertisement:

Most people spend their lives trying to avoid incarceration, but on some rare occasions, being in prison is better than being on the streets. Sometimes characters need to meet someone on the inside for information, revenge, or a rescue mission. Or maybe they need protection that only iron bars and 24-hour surveillance can provide. Whatever their reasons, they're prepared to do what it takes to land comfortably in the clink, but prisons aren't hotels, and police won't let you in just because you ask them (unless you are trusted and working with said police), so characters will generally have to break some sort of law and intentionally get caught. Smart characters will adjust the severity of their crime depending on where they want to end up and for how long. Dumber or more desperate characters may wind up with a longer or harsher prison sentence than they wanted.

Supertrope to Can't Get in Trouble for Nuthin' and Desires Prison Life. See also Trojan Prisoner, Play-Along Prisoner, Conveniently Cellmates, and Chained Heat. This is a subtrope of Unishment, where being put into prison is the desired "penalty" for committing a crime, and of Captured on Purpose. Named for, but not particularly related to the "Get out of Jail Free" Card.