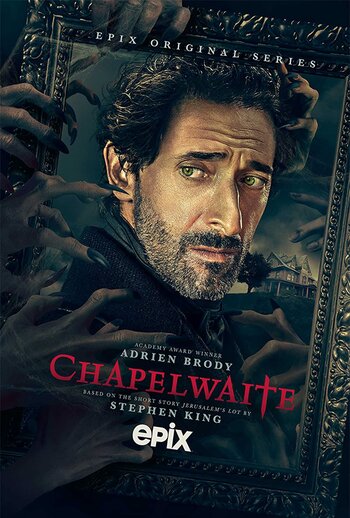 "There's something inside that you hide from us. It scares me."
— Loa, to Charles Boone
Advertisement:

Chapelwaite is a 2021 Horror limited series made for Epix by Jason and Peter Filadi (The Craft). It is an Adaptation Expansion of Stephen King's 1978 short story, Jerusalem's Lot, which in of itself is more or less a prequel to King's novel, 'Salem's Lot.

In the 19th century, a sea captain, Charles Boone (Adrien Brody), learns that he has inherited a saw mill and an estate in Maine named Chapelwaite from his estranged cousin Stephen. Hoping to give his daughters Honor and Loa and son Tane a new life following the death of their mother, Charles decides to live on the estate and try expanding the saw mill into a shipbuilding business. Unfortunately, the new life he envisions for himself and his family has shaky foundations. Charles learns that Stephen committed suicide after the sudden accidental death of his daughter Marcella and is troubled by the strange rat-like noises in the mansion's walls. Things are even worse outside the house. Many people from the nearby settlement of Preacher's Corners look down on Charles' children because they are half-Hawai'ian and believe that the Boone family is at best cursed and at worst somehow responsible for a mysterious disease killing the town's residents. Then there's the matter of Charles' increasingly realistic and disturbing hallucinations involving worms...