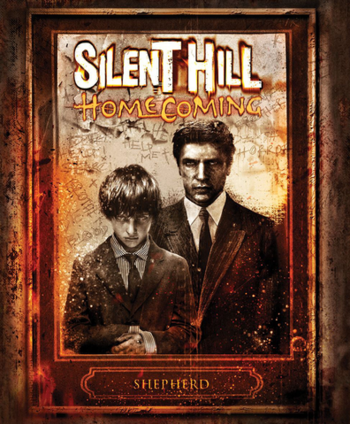 "Dysfunctional family" doesn't even begin to describe the Shepherds.
"So difficult to remember.
"The warm sunlight dancing on the water, the smell of cotton candy in the air, and the sound of wind blowing through the trees."

The main character this time around is Alex Shepherd, a Special Forces soldier who has been discharged from the hospital and sent home after being wounded in battle. Arriving in his hometown of Shepherd's Glen, he finds that all is not right with the world: the town is covered in fog, people (including his younger brother Josh) are disappearing, his father has left to look for his brother, and his mother is catatonic. The dark forces of Silent Hill soon infect the town proper, transforming it into a nightmarish otherworld where Alex must struggle to survive against hordes of monsters and waves of increasingly obtuse symbolism... as well as a group of mysterious cultists who seem to bear a grudge against him.

Joining Alex on his quest is Elle (a childhood friend who is trying to survive) and Wheeler (the sheriff's deputy who just wants to get to the bottom of things). Along the way, Alex encounters several more characters — including an Expy of everyone's favorite monster, Pyramid Head.

This installment is tied in several ways to the series's roots: it does away with inventory limitations (except for a cap on ammunition), it has unbreakable weapons, and it also features other characteristics of the more recent games. It has a similar atmosphere to Silent Hills 1 and 3 (straight up horror without the lingering melancholy of the second game), and it continues the series tradition of multiple endings (at least one of which is as absurd as you would expect). Alex's military past makes the combat more complex, with melee combos and dodging attacks being a major element of the gameplay. Unlike previous series protagonists, Alex can also actually aim firearms, which comes in handy.

This game has a Shout Out page.

Amnion is the final boss, a monstrous manifestation of Joshua and Alex's guilt over the circumstances of his death.

Amnion is the final boss, a monstrous manifestation of Joshua and Alex's guilt over the circumstances of his death.