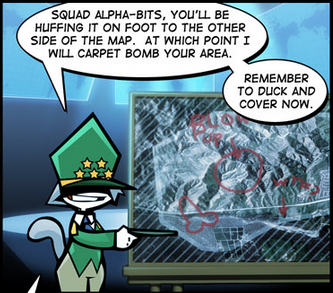 "Everyone else just whore all the aircraft.

"
"Only he could have permitted the First Afghan War and let it develop to such a ruinous defeat. It was not easy: he started with a good army, a secure position, some excellent officers, a disorganized enemy, and repeated opportunities to save the situation. But Elphy, with the touch of true genius, swept aside these obstacles with unerring precision, and out of order wrought complete chaos. We shall not, with luck, look upon his like again."
— Harry Paget Flashman, regarding General William Elphinstone, Flashman
Advertisement:

They are utterly ruthless, unfettered, and fanatically dedicated to the destruction of their enemies. Whether fighting for good or evil they have no qualms with employing the cruelest, foulest, most abominable strategems and minions—using every means both fair and foul in the pursuit of their goals. Their limitless ambition and cunning make them the very epitome of martial brilliance...

...or at least they would if they weren't also a gibbering moron.

For some reason, villainous organizations which have no problem with kidnapping, blackmailing, threatening the destruction of the world, or even kicking puppies, somehow tolerate having an idiotic leader whose inept schemes for world domination are always foiled, often because of the utterly bizarre plans and implementation that General Failure himself is responsible for. Oh, they might bitch and moan about the dumb ideas, but it's not like they'll ever do anything about it.

Occasionally, The Watson, the Meta Guy, or other characters will question the Big Bad's ludicrous schemes, but since they're not in charge, that will be it. Very often The Starscream is the only one who opposes the leader at all, making him look like the Only Sane Man on their side.

Common phrases of the General usually include "I wrote the manual on military tactic X," or "This reminds me of the time we fought enemy X in an improbable location, what a tale that is!"

General Failure may have started out as a competent commander in a position of less importance, and his success led to him being promoted beyond his capabilities. If this is the case, then it's a villainous example of The Peter Principle. If he started out as an incompetent mook or private, you can expect his rise to be an improbable series of Kicked Upstairs, Uriah Gambit and Promoted to Scapegoat that never deliver on the bad ending or being the only living replacement left when his superiors keep dying.

Most of the time the leader is also a Bad Boss, which can lead to We Have Reserves and possibly Mook Depletion. One wonders sometimes if the good guys are secretly making sure the doofus on top stays there. General Failure is essentially the personification of Failure Is the Only Option, and is the eventual destination of severe Villain Decay. He often bears similarities to The Neidermeyer, but on a much higher scale. Compare Armchair Military, Miles Gloriosus, Modern Major General. Pointy-Haired Boss is a similar non-military trope.

This trope does not happen too much in Real Life. Really incompetent officers usually never even graduate from the military academy: incompetent officers mostly don't tend to get promoted past Captain (Lieutenant in the Navy) level. Most real life officers appearing as General Failures are simply unlucky ones (and conversely many military "geniuses" just got lucky and afterwards announced I Meant to Do That).

Granted, in the mid-19th Century and prior, there was (more room for) nepotism, and military ranks and jobs had to be bought and were only available to people of the right class/social standing. But even then there were limits to how much incompetence a military establishment would tolerate before either you got demoted, or some of the people dying under your command saw to it you got hit by a stray bullet, or you and your remaining troops were captured by a foe with more competent leaders.

This isn't to say incompetence doesn't exist within Real Life militaries, of course. It's just that usually, it can't be pinned down to one person. More often than not, bad decisions are made by several people due to a combination of factors involving miscommunication between personnel, an outdated and hopelessly bloated Vast Bureaucracy, a culture and power structure that encourages higher ranking individuals to interfere in the work of lower ranking personnel despite having no expertise in their field (think Executive Meddling, but for armies instead of TV Networks), and to top it all off, good old groupthink. In other words, it's not a leadership problem, it's a structural problem.

Real life General Failures may have existed and were quite notorious, but they alone were only responsible for a fraction of military blunders through history.