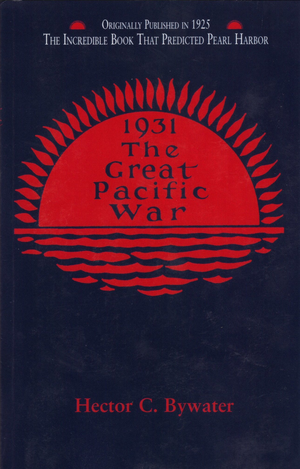 "War is never a paying proposition from any national point of view. . ."
Advertisement:

Originally written as a fictional account of a war in the near-future, but nowadays fitting more in the alt-history genre, The Great Pacific War is British naval analyst Hector Bywater's 1925 novel of a 1931 war between Japan and the United States, written as if a post-war historian was recounting the facts for future generations.

It was as much Speculative Fiction as predictive. Bywater was claiming that, given the way naval warfare was developing and given the tension between these two nations, if a war did occur it would probably resemble the one in his book. He wasn't prophesying that such a war would take place. It is also possible that Bywater intended to counter worries in the West of the "yellow peril" by illustrating that Japan didn't have the ability to take on America in a prolonged war (something Isoroku Yamamoto, who may have read the book, would have agreed with).

The book opens with a summary of Japanese control of Korea and parts of China, and how the Japanese government's view of this area of the globe is that naturally it should be the sphere of influence of themselves alone, and none of the major world powers should have a stake. But after an American company wins a major mining contract in China, the Japanese Cabinet realizes their ability to exploit the region is being checked, and their already-delicate economy is in trouble as a result. The war is started both to gain a free hand in East Asia and to unify the people, who are getting involved in unrest due to communist/labor uprisings, against a common enemy.

The fighting sea-saws back and forth for most of the book, with the US taking longer to train up its sailors and get into full wartime mode than Japan, and proves taxing on both nations. However, ultimately (again, just as in the actual war that would happen 16 years later), the American advantages of population, economy, and industry make them far more able to withstand this than Japan is. After less than 3 years, Japan has lost all ability to prosecute the war and has seen the US make major gains of territory across the Pacific, and can only try to negotiate for a peace treaty that doesn't leave them humiliated diplomatically as well as militarily; meanwhile the world is left wondering how the Japanese ever believed they could take on the United States in the first place.