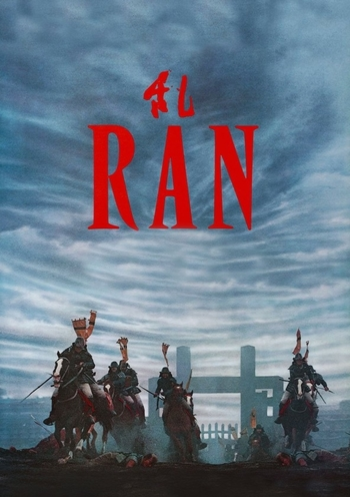 In a mad world, only the mad are sane.
"You spilled an ocean of blood. You showed no mercy, no pity. We too are children of this age... weaned on strife and chaos. We are your sons, yet you count on our fidelity. In my eyes, that makes you a fool. A senile old fool!"
—Saburo Ichimonji
Advertisement:

Ran (乱, Japanese for "rebellion", or "disturbed/confused") is a 1985 film by Akira Kurosawa, made late in his career. The third and last of Kurosawa's Shakespeare adaptations (after Throne of Blood, based on Macbeth, and The Bad Sleep Well, loosely based on Hamlet), it was heavily influenced by King Lear, relocated to the Warring States period in Japan.

Warlord Hidetora of the Ichimonji clan (Tatsuya Nakadai), once a feared and powerful man, is now in his twilight years. He decides to divide his domain between his three sons Taro, Jiro, and Saburo, while he remains a figurehead. Saburo, the youngest, disagrees with the plan and is banished. Sound familiar?

With Saburo away, Taro and Jiro begin feuding over succession as head of the clan. Egged on by his wife, Lady Kaede, Taro uses Hidetora's insolent jester Kyoami as a pretext for stripping him of his powers. Hidetora is made persona non grata and forced to relocate to Saburo's abandoned castle, which is then sacked by Taro and Jiro's forces. Unable to find a blade to commit seppuku with, Hidetora goes mad and wanders, dazed, from the burning castle, as his world crumbles around him.

Kurosawa wrote the screenplay ten years before its eventual release, during which he meticulously painted storyboards for every scene while he sought funding. At the time of its release—five years after Kagemusha, a film considered by Kurosawa a dress rehearsal for Ran— it had the largest budget of any Japanese film ever made until then. While it garnered praise from critics worldwide, its box office performance was lackluster, and was passed over for the Academy Awards in both the United States and Japan. In the years since, it has come to be seen as one of Kurosawa's best films, and one of the best films of all time.

Not to be confused with a certain nine-tailed kitsune, nor a sex-changing martial artist, Shinichi Kudo's Love Interest, or a Norse sea goddess.